A while ago I jokingly said to my housemate ‘You should write one of my columns and tell people what it’s like to live with a pro-triathlete.’ To most people Niall is a sports nut. He trains most days around work, quite often twice a day, and has even been known to join me in the pool at 5.25 am. He’s also one of the most easy going people I’ve ever met and puts up with all the crap associated with living with an athlete remarkably well. But to my surprise he was keen to take me up on this offer.

I thought he’d come back with some of the gory details. Sports kit and bikes everywhere; Enormous boxes of energy gels, peanut butter, Erdinger and triathlon kit turning up on the doorstep at regular intervals (our recycling bin is always full of cardboard boxes); Anti-doping waking him up at 5am for drug tests; The amount I eat – ‘Lucy portions’ that are at least twice the size of any normal person’s; The fact that I rarely buy junk food but if I do will easily get through a whole tub of ice-cream in one sitting; My coffee consumption; The carnage I create in the living room when I’m packing for a race. And perhaps my ‘make-it-up-as-I-go’ approach to training.

Actually, what he wrote surprised me. Here’s a snapshot.

“Few appreciate the amount of work that goes into being at the pinnacle of your sport. Since January 2015, I have been living with Lucy and it’s given me a unique appreciation of what it takes to perform at the highest level in triathlon. Before moving in with Lucy I had some trepidation, as we had actually not met before she moved into the house we share. From having some mutual friends in Cambridge, I had built up this image of what ‘the Gossage’ was like in my mind. I had imagined this petite little Triathlon Terminator with an insatiable drive and determination that would chew you up. Not only this but she’s a ‘doctor doctor’, which made her even more intimidating in my mind.

The first time we met was when I came back from a skiing holiday. I walked in with my girlfriend to find Lucy smashing out a session on the Wattbike with music pumping out. At that point I wondered what I had let myself in for. After a couple of weeks of living with Lucy I thought I had her sussed out – she seemed like this normal petite blond girl who just happened to be exceptionally talented. However just when you think you know Lucy she would throw a curve ball to remind you that she was no average housemate. One Monday morning in February I got up for work to be greeted by Lucy who had been up since 5am making beetroot soup just because she couldn’t sleep and that’s what she deemed normal for one to do.

Lucy once asked me if I thought I could be a professional athlete. Before living with Lucy I would have said yes, it couldn’t be anything but amazing. Only having lived with Lucy and having seen first-hand the amount of work required to perform at the pinnacle of your sport do I have an appreciation of what’s required to succeed at triathlon. I could write a long list of things which Lucy spends time doing to be the best possible athlete she can be which most people wouldn’t even consider. To give just a small example of her drive, about four weeks ago I came back from holiday only to discover that Lucy had broken her collarbone. It looked like she might miss Kona, being only 8 weeks away. Without feeling sorry for herself Lucy decided that when life threw her lemons she was going to make lemonade. Three days after breaking her collarbone, she was back in the pool and had swum 2km single arm. This was before surgery! Double turbo days in the living room became the norm and after a couple of weeks she had already clocked up a 5-hour turbo with her arm strapped in position. Most people think being a professional athlete must be glamorous and a lot easier than most people’s normal day jobs. Having lived with Lucy I cannot emphasise enough how much toil goes into her efforts to be the best she can be. Most people including myself just cannot fathom what’s it takes, and as such as much one would like to be a professional athlete, most just wouldn’t have the mental fortitude never mind the physical attributes required to succeed.”

I thought it was interesting hearing Niall’s side of living with me. Though I’m sure he was being nice as there’s a ton of less positive stuff he could have added in. I promise I didn’t bribe him!

So anyhow, back to my collarbone. I’m now 4 weeks post-surgery with 3.5 weeks before Kona. I have two arms that I can move, I’ve ridden my bike outside and my flights are booked. That’s definitely a more positive state of affairs than I expected last time I wrote. Of course training has been very different to my planned build to the world-champs. It’s been far from ideal. But actually, I couldn’t be more proud of the way I’ve dealt with a pretty shitty situation. I know, hand on heart, that to date there is absolutely nothing more I could have done to get myself to Kona in as decent a shape as possible. And in many ways the pressure is off. Nobody has any expectations. After all whenever anyone asks me how they think I’ll do I can just answer by pointing at my scar! If I’m honest I think I’m as much intrigued to see the results of my very alternative training strategy as I am worried about the outcome. As far as lemonade making goes, I’m making a pretty decent batch from some particularly sour lemons. And knowing that means that, whatever the outcome on the 8th October, I’ll fly home with an enormous sense of pride and my head held high. 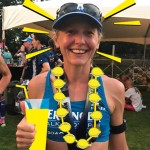