It’s taken me a while to work out what I think about my race in South Africa on 6th April. When I finished I wasn’t really sure whether I was pleased or disappointed. There are so many positives to take from this race. I dug deeper and fought harder than ever before. I was pushed to my limit and found out how much I can hurt. I gave everything I could on the day and ultimately finished with a higher placing than I had expected.

Yet despite that, I can’t help but feel a bit disappointed that I didn’t quite have the float day I’d hoped for. It was a day where everything felt hard, even the warm up. I felt sluggish and flat and it felt hard work from the off. I guess some days are just like that. If Ironman UK last year was the easiest Ironman I’ve ever done, this one was definitely the hardest.

I didn’t have a great swim, though it was far from being disastrous. Though my swim has improved a bit, all it has done right now is put me to the front of the pack I’d usually been hanging on to. With a mixed pro start, the quicker women get a good draft off the men while I was stuck in no-man’s land with a couple of slower guys on my feet. However I knew this was likely to happen and did a pretty good job of not worrying about it and focussing on the positives – I was controlling my own effort and expending less energy, though working out where I was going proved more challenging than I’d hoped.

My solo swim made for a lonely solo bike ride. 112 miles on your own is a long time, particularly when you’re having a tough day. I was working much harder than I thought I would be to maintain a power lower than I’d trained and I was having to work hard to fight the negative thoughts that kept sneaking into my head. Convincing myself that I was still in the race was critical but not easy and I found the bike both mentally and physically challenging. I’d mentally rehearsed being behind and I’d mentally rehearsed being on my own but it was still hard going particularly as the number on my power meter was telling me I wasn’t riding as well as I’d hoped to.

So after nearly 6.5 hrs racing a solo time trial I went a bit crazy to find myself arriving into T2 just as Simone and Michelle were running out, with the gap to Jodie in the lead only 9 minutes. Boom. Suddenly the lights went on. I was still in the race. Nope, it was more than just being in the race. I could win the race. In fact, at that point I backed myself to win the race. Game on.

So obviously, I started the marathon at a steady, controlled, maintainable pace aimed at gradually reeling the girls ahead in….. Or not. I ran out of transition like a maniac racing a 5km. Arms flailing, breathing hard, running like there was no tomorrow; definitely the easiest way to make a marathon as painful as possible. After a stonking 5km the run quickly changed from a smashfest to a sufferfest. I was counting steps from 10km in. That’s 32km of counting steps which is a lot of steps. I knew Simone was running well just behind me. I also knew we were both catching Jodie albeit slowly. And I knew I was hurting like never before. Around half way I felt both my big toe nails explode. I was running like a robot. Mechanical rather than fluid. Stochastic rather than flowing.

Simone passed me with around 7 miles to go. And for 2 minutes I settled for third. I’d raced for the win and failed. 3rd was OK. Just get to the end. But then I started fighting again. Once again, mental strength became more important than physical. It wasn’t over yet. Simone might blow. We might both catch Jodie. Don’t settle. Keep pushing. Keep hurting. So the step counting continued. Simone remained in sight and we were reeling Jodie in. 10km to go. 5km to go. Please let it finish. Please let it not until I catch her. I finally caught Jodie with around 2 km to go. Absolutely everything was hurting. Feet were agony. Stitch like never before. Yet, right until I saw the red carpet I didn’t quite give up on the possibility of winning. It isn’t over until it’s over.

Simone had an outstanding race and thoroughly deserved the win. She paced her race perfectly. I feel for Jodie – losing not one but two places so close to the end must hurt big time. For me, I rank this as my gutsiest race so far. I somehow managed to pull out a great result on an average day. I gave it absolutely everything I could on the day and know I can’t ask more of myself than that. Perhaps, most importantly I backed myself at the start of the run. Yes, that resulted in me running like an idiot for 5km but it reflects a big evolution in my self-belief. I went for the win and didn’t get it but I definitely wouldn’t have got it if I hadn’t backed myself. I raced like a proper pro and, though I still hope that physically I can be a bit better than I was in this race, mentally, I think I’ve proved I’m an athlete who can fight. And in Ironman that can be just as important as physical fitness.

Thank-you to everyone who supports me, particularly my sponsors, and my parents who are having to travel further afield these days in order to watch me suffer! 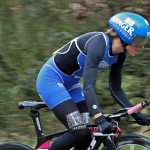 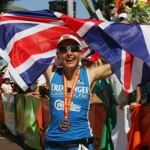