What do you do when you achieve something you haven’t even dreamt of? Laugh? Cry? Shout to the skies? Get horrendously drunk? Retire even???

On Sunday I won Challenge Barcelona. If I’m honest, I had dared to dream of crossing the finish line first. That would surely be the ultimate finale to what truly has been an unimaginable year of triathlon for me. I’d thought, if I had a perfect race, I might just break 9 hrs 10 which would surely put me in the mix for a podium, but I’d never really believed I would beat Mirjam Weerd who finished second.

Sub 9 though – that’s something special. In fact, that was my secret goal for next year. Enter Roth and try to break that seemingly impossible 9 hour barrier. Even writing this 2 days after the race it seems inconceivable that me, little Lucy, has an 8.58 ironman to her name. Yet somehow I have and I’m not sure I believe it.

10 days after Zofingen I was still pretty broken. I thought I’d recovered, tried to cram some training in and was going nowhere fast. I remember dragging myself out on a ride with an overwhelming urge to go out and get hammered instead. I wanted to be dancing to the tunes on my ipod with a beer in my hand, not pedalling my stupid bike to them. That’s the first time I’ve felt like that all year. It took some stern words from both my coach and my swim coach to make me believe that resting was the best way to get ready for Barcelona. Eventually, true to their words I swapped training sessions for naps and a week later felt a new person, back enjoying training again and getting increasingly excited at the prospect of one last ‘smashfest’. I guess consequently, this was really the first race of the year I had truly been properly rested for,

In addition, knowing it’s the last race of the season took quite a lot of the pressure off. I knew I would be pleased with my season regardless of the outcome in Spain. And that meant I could start the race with a boom or bust attitude. I didn’t want a mediocre race; instead I was going for glory and accepting I might fail. For once I wasn’t going to race conservatively. I planned to go out hard and see how long I could hold on for. Not my normal race strategy but I didn’t see the point in pootling round and settling for an average race. After all, I wanted to deserve a few weeks of drinking, no alarms and being relatively normal! One way or the other I wanted to have found my limit at the end of the race – and if that meant I blew up half way round the run, at least I’d know where that limit was next year.

So all in all I gambled. And it seems as though, on Sunday, my gamble paid off.

So the swim, wow, that was hard. For the first 1500m I was somehow hanging onto the back of the front pack and literally felt as though I was about to explode. Every time I took a breath I seemed to be losing the feet I was following, so then did 4 strokes without breathing. Relax, no, lost them again, more strokes without breathing. I NEVER swim that hard in the pool. I suspect probably I need to! Thankfully, the pack split in half just before the halfway point and the pace of my group slowed down for the second half, but it did cross my mind that possibly I had blown my race going so hard in the swim. Having said that, the group behind us was a further 3-4 minutes back so hanging on for dear life was worth it.

The bike. To be fair that was reasonably comfortable after the first 10 miles when my jelly legs had settled. Tina Boman and I were riding at the same speed so decided to work together, knowing there was a group of 3 or 4 girls about 3 minutes ahead. So we took it in turns to share the work doing turns (we were definitely legal!) and did a pretty good job at ticking off the miles comfortably, working a bit harder as we passed a couple of the other girls to make sure they didn’t stay with us. I knew Mirjam Weerd was way off the front but we were riding comfortably hard and I was happy the pace wasn’t too hard or too easy. The pack ahead made up a bit of time early on in the ride but I think it then fragmented and we made it up towards the end when we passed Meike Krebs, with Daniella Sammler in sight just ahead and Lisbeth Kristensen not too far away. A couple of male ‘pros’ tried to break up our ‘party’, but ultimately this was my first experience of tactical riding and I think we handled it as well as possible in the circumstances. Thanks Tina!

So onto the run. ‘Woman possessed’ is probably the best way to describe the way I started this!

Mirjam was 10 minutes ahead so it was going to be a tough ask to catch her. But boom or bust I was going to give it a go. I was surprised about how quickly the gap was coming down and eventually caught her just after the half- way point. Until that point I was quite enjoying the run – acknowledging the shouts and cheers and keeping an eye on what everyone else was doing. But then I looked at my watch and did some maths. Easier said than done when you’re running hard. But suddenly, I realised that if I did the second half marathon in less than 1hr34 I’d finish in less than 9 hours. 47 mins for 10.5 kms and repeat. Surely I could do that. I didn’t know what speed I was running but tried to do the maths every time I passed a check point. And it seemed as though it was on – just. Little Goss was on for a sub 9 clocking if only she held on. The last 80 minutes of the run is a complete blur. I think I zoned out completely and was simply trying to concentrate on some kind of rhythm, counting steps and staying in the hurt box. The last 10 minutes was probably the hardest. At that stage I knew deep down it was in the bag unless I tripped or fell but I couldn’t let my brain believe that until I actually got to the finish.

When I did get to the finish I simply didn’t know what to do. My first reaction was to smile. Then to sit on the floor and cry. Then to jump up and run back down the finish chute like a mad woman. If I’m honest I still don’t really know what to do with myself. I woke up the next morning and thought I must have dreamt it. Until I tried to get out of bed and realised I most definitely hadn’t – those aches and pains hadn’t come from a dream…. Today, back in work, it all seemed a very distant memory and I think it’s going to take a while for it all to sink in.

Time now though to get myself down the pub, and enjoy one or two of those celebratory beers I’ve been looking forward to! I’ll do a proper end of season blog shortly, but there are a lot of people I need to thank. My coach, my sponsors, my training buddies (aka domestiques in some cases), my supportive and understanding bosses, my family and my friends. You know who you are and I owe you all. 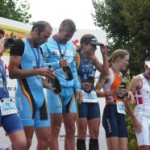 An easy day out 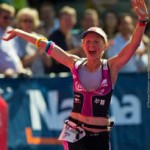