I’m just on my way back from 9 days in beautiful Majorca.

Good friends, good banter and lots of smiles; this trip definitely felt more like a holiday than a training camp.

I may have moaned a bit about the late starts and coffee stops (Goss the boss didn’t get to boss this week!) but the quality of the riding when I was out there more than made up for it, and I got enough swimming and running in to keep me ticking over.

Make hay while the sun shines and all that – it’s not exactly been easy to cycle in the UK recently so I was more than happy to take advantage of the opportunity to cycle with stronger cyclists and make it a bike focus camp. And being forced to sleep in and relax a bit is no bad thing….

I spent my first 4 days in Arenal sharing a room with Emma Pooley on the Perfect Condition training camp. I’d like to say I was riding with her – realistically I was riding well behind her – but it was inspirational to see how a proper cyclist rides a bike, both up and down the hills.

Emma said to me one day, “Have you got to the stage yet where you’re faster going up than going down?!” Yes it’s great being small and relatively light to get up the hills ok, but as she demonstrates so well, that’s not an excuse for descending badly. I’m still a long way from being good at going down, but am definitely a damn site better than last year. Progress!

I then spent a week or so with friends from Cambridge staying in Puerto Pollenca. All quality athletes and some good healthy competition between us, alongside a lot of laughs, a lot of miles, a roof terrace hot tub, 8 people in a 6 person appartment and good banter…

Perhaps the training highlight was the time trial up Sa Calobra. Officially ranked by world number one triathlon groupie RJC we’d psyched ourselves up for a proper smashfest and the ‘field’ would have made many a race promoter very happy; world class or near enough over several different categories of athlete. The roadies wanted to cruise out there at 10m/h and wouldn’t go anywhere near the front of the group on the ride out.

We all (yes, I even got sucked in) removed our saddle bags for the climb and most of them emptied their water bottles. Shot of espresso at the top to get our blood pumping. This was no normal training session! We set off at staged intervals up the climb with the handicap system theoretically meaning we’d reach the top at similar times. My only goal was to beat Gill, no mean feat when you look at the size of his quads. Though I did, just, I had to work so hard to do so that I somehow ended up with a huge bruise in my quad. Gillipede – you know what you need to do next time to get that 30 seconds back….

Anyhow, all in all it was a pretty epic week. So the hard work’s done now for the time being. Bring on the races!! 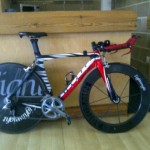 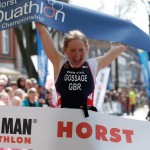