Mum came down to Cambridge yesterday and we were walking down the backs in the pouring rain with winter coats, gloves and hats. Not the spring like stroll she had hoped for, though the sight of snowdrops, crocuses and the first daffodils is sure evidence that spring isn’t too far off.

And with spring comes ‘mini-races’; little tests to see where I’m at and get the mind and body back into racing mode again. I’m a big fan of using races for training. Firstly because I enjoy racing, particularly local races which friends and training partners are doing. And secondly because I think it’s much better to make mistakes in the smaller races which don’t matter than in the big ones that do. Lots of people don’t like putting themselves out there unless they’re fully fit and rested but I’m someone who likes using smaller races as good hard training sessions.

This year, rightly or wrongly, I decided to use exactly the same swim and run test format I did last year. A 1500m time trial in the pool on the Friday followed by Cambridge half marathon on the Sunday. Benefits being that I could make a direct comparison. Disadvantage being if I was slower than last year it would be pretty gutting! Fortunately I wasn’t slower on either though my run time was only 13 seconds quicker… Not exactly a ground breaking step forward but it was still a pretty decent run (1.18.29 and 3rd female overall) on a slightly different course in truly horrendous conditions. It wasn’t quite what I’d hoped for – I think I’m running a bit better than last year at the moment – but it was the best run I could get out on the day and all things considered was far from a disaster.

I was mega impressed with my boss who managed 2.02 in his first half marathon. I never thought I’d be having chats with him about losing toe nails after running when he appointed me 4 years ago. Unfortunately I missed seeing him finishing as I was having a chat with the lovely John Levison from tri247 about my plans for the year (read his post). Typical high flying Cambridge professor finishing 15 minutes quicker than he had told me he would….

The following weekend I raced the Monster Racing Ely Duathlon which is a brilliant local race. I’ve raced all their duathlons since they started in 2011 and they’re well organised and always good fun. They also do a superb middle distance in August. Well worth checking the races out if you’re local to Cambridge. Anyhow, I have to admit I wasn’t convinced racing it would be a great idea the week after the half and wondered whether it would just be a bit of an embarrassing dawdle. Particularly as I knew I’d have very decent competition in the form of Vicki Gill and my friend and running buddy, Esther. At the end of the day though I thought it’s a training race, man up and get on with it! More importantly I really wanted to try out my brand new, completely blinged up Vitus time trial bike. I’d ridden it once for a long ride on the Friday, then had a bike fit in the evening (I’d not set it up properly!) so it was raring to go and be ridden fast. So there wasn’t really an option other than taking it to play in a race! Good old Chain Reaction have really gone to town with it – thought to be honest I don’t know enough about bikes to fully appreciate the top end components they’ve fitted it with. Luckily however I have enough male friends who do to fill me in. “Blimey they’ve even given you a SRAM dome cassette”. Me – “Eh. What does that mean?!” Yes Chain Reaction, you’ve well and truly done me proud. I just hope I can do the bike justice! Thank-you – I really did fall on my feet when I signed with you last year.

So I’ve got the bling bike. What about some bling wheels. Well, what can I say other than I am one lucky girl…. Anyone heard of Lightweight? I’m probably the only person in the cycling world who hadn’t until they contacted me in December. A quick Google search made me think they must surely have emailed the wrong person. I didn’t even know wheels that nice existed! It turns out they did mean to email me, and somehow I find myself in possession of 4 of the lightest and fastest wheels in the world for the season. Wowzers!

Anyhow, I got side tracked – the point of all that was that I wanted to race and if I didn’t win it wasn’t the end of the world, at least I’d have had a good training session and test ridden the bike. And I always knew the Monster races are good fun, particularly with a good contingent from Cambridge Tri racing. In the end I did win though I had to work for it. I enjoyed a good old ding dong with one of the guys from Cambridge tri who I just beat but who will no doubt beat me next time we race, and it was great to have my buddy Tom Vickery racing again, though maybe he could have won if he hadn’t given out so many high fives! All in all a fun morning out and another little box ticked before the big ones.

I’m off to Majorca in a week or so for 8 days training and then it really is race season. First big one is the European Duathlon in Horst, followed by Mallorca 70.3 in May. Bring it on – I can’t wait! 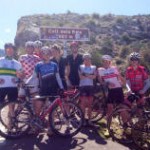