Another weekend, another tough race… I’m not making it easy for myself this year!

This time up I went to St Polten in Austria for the 70.3, one of the most prestigious 70.3 European races. So if Majorca was a tough field Austria was truly formidable. 4 out of the 7 women who went sub 9hrs at Ironman in 2012 were there, alongside 2012 Olympian Daniela Ryf, Lisa Hutthaler the winner of Majorca, my regular race rival and duathlon world champ Eva Nystrom, to name but a few. Just an easy day out then!

If I’m honest I have mixed emotions about this race. My performance was very solid but not outstanding. How much of that is down to the psychological impact of racing such tough fields I don’t know. But I do know that this is the first trip I’ve been on which I haven’t really enjoyed.

From arriving at night in a rain storm with no internet, no map, no food and no idea where to get anything to eat (I found a McDonalds eventually!), to spending 3 days on my own in a fairly soul-less room, eating gnocci out of tupperware and mostly trying to write a paper, for the first time ever I found myself questioning a bit why I was there. Particularly as I knew I was missing my 10 year Oxford medical school reunion and the chance to steal another silver candlestick (long story).

Luckily Holly Lawrence was there too, although staying a couple of miles away in town, but I think we were both glad to meet up for a bit each day so we weren’t completely isolated from the world! I’d decided to come out early so I could ride the bike course and check out the descents before the race. And though I think this helped come race day with hindsight next time I’d be loath to come out so early unless I was with a group of people. It’s all very well getting some work done out here but unless you’re prepared to pay for a nice hotel and make a holiday of it it’s probably not worth it.

Anyhow, waffle over. What about the race?

So they cancelled the swim at midday on the Saturday. I was surprised by the decision. For Brits the lake was positively balmy and it certainly wasn’t Arctic weather.

I would have preferred to have the swim (especially since I’d perfected my diving technique ready for the pontoon start!). Realistically I didn’t think it would impact my finish position as a mid-pack swimmer (it didn’t), just who finished ahead and behind me (it did) – but at the end of the day we all signed up to a triathlon. However you have to respect the race director’s decision and deal with what you’re given. I did feel for the strong swimmers who understandably felt hard done by.

Anyhow they decided to set us off in 2 groups of 10, 1 minute apart and I was in the second group. The first 20km is ever so slightly downhill and had a massive tail wind – Eva set off like a rocket and Holly was in front. I was spinning my legs as fast as they’d go only just managing to keep Holly in my sights and was really wondering if I was just having a shocker (though a sub 21minute first 10 miles made me think it couldn’t be that bad) – but it did make me realise how useful a power meter would be in situations like this. How else do you guage how hard you’re working when you’ve run out of gears, are riding close to 30m/h and getting dropped? It was only when I passed a few riders including Daniela Ryf and then caught Julia Gajer (both of whom had started in the first group) that I realised I probably wasn’t riding badly.

My plan had always been to try and make up time on the climbs, which I did nicely. And I was fairly proud of my descending – thanks to a bit of cornering practice with a friend (thanks Dave!) I was much less cautious on the descents and corners. “Don’t brake, think about your line, relax, don’t brake, relax, blimey it’s windy, man up, RELAX”. And then my chain jammed between the cassette and frame half way down the last big descent. Pretty scary at that speed. It took me a while to work out why I couldn’t turn my pedals. “Why’s it not moving, what’s going on? Flip I’m going to have to stop. Aaaaaaaargh. What, the chain’s still on, why can’t I move it? What the hell’s happened? They’re all going past, s**t s**t s**t, breathe, relax, breathe, think, ok it’s on at the front, must be off at the back. OK that’s the problem, ok it’s fixed. GO. RELAX!”

In reality it probably took a minute or so but it felt like eternity. I knew Holly had gone past with some other riders though didn’t know if they were men or women. So annoying but in reality it didn’t lose me too much time. I’d just have to make it up on the run.

I started the run feeling much better than I did in Majorca. Certainly for the first 10km I felt like I was moving fairly well – the problem was that so were the women ahead and most of them were too far ahead to be a ‘carrot’. Mmmm. I like carrots. I don’t like being one. I hit a mental low spot at around 11km when Julia ran past me. I couldn’t see anyone ahead and kind of gave up for a bit. Until I kicked myself and realised she’d started a minute ahead of me so even if she was ahead I could still beat her. Doh… By the time I’d realised that it was too late to minimise the gap to her but I did give myself a metaphorical kick up the backside for the last 4-5km and started feeling like I was running better again.

Or maybe it was just the coke. The race finishes with a tantalising run past the finish chute, a lap of the 400m running track and then back into the finish chute. Great way to finish if you’re running well, somewhat soul destroying if you’re not. “OK Goss, it’s not over until it’s over”. I hadn’t seen anyone in touch ahead but given the staggered start and busy race course at that stage it was just conceivable there could be someone less than a minute ahead of me. So I gave it my best 400m (+) rep ‘just in case’. And this time I got lucky – Anja Beranek finished 54 secs ahead of me which meant on chip time I beat her by 6 seconds to finish in the money. So I may have lost it mentally for 6km of the race but at least I salvaged it by digging deep at the end. Tween – those 1 min reps came in handy!

So mixed feelings really. It takes a different mentality to accept that finishing 6th in such a stacked field is a decent result – it’s much easier to accept a second place in a weaker field. And I know I need to be realistic – I’m deliberately picking tough races this year to test myself and I’m so grateful to Chain Reaction for helping me out a bit with travel expenses so I can afford to do this and race the ‘big girls’ rather than worrying too much about prize money. Having said that, I think this week has made me realise how important it is to keep things fun. Maybe I’m just stressed about trying to get my PhD done and dusted and this paper written but this is the first race experience which hasn’t felt fun. And I know I always race much better if it does!

Big congrats to Eva and Yvonne – Eva you’re a legend! Hand on heart I think the lack of swim wouldn’t have affected my finish position – with a swim today Anja would have beaten me but I suspect Sonja wouldn’t, and there was quite a big gap to the next finisher so I reckon I’d still have finished 6th.

And the top 3 would have been the same regardless. Having said that I do hope the next ‘triathlon’ I do is a triathlon. But more importantly I hope that the whole trip feels fun!

PS – Ironman have apologised for charging my parents to attend the awards in Majorca – so thank-you! 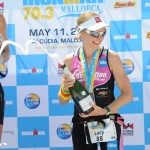