But what if I fall?

No-one likes failing, particularly me. And sometimes I think the fear of failure can perhaps be worse than the failure itself. I failed to do myself justice in Hawaii and going into Ironman South Africa, I’ve got to admit I was pretty scared that my body might let me down once again. I guess at the back of my mind I had come to terms with the fact that, if my Achilles did stop me running, maybe this would be my last ever Ironman. So in my head I wasn’t just dealing with the usual pre-race nerves and excitement – in my mind it was now or never.

I’d been gradually building up my running since Christmas, and, while I wasn’t running as much as I have previously, when I was running I was running well. So, until 3 weeks out from the race I was quietly confident that I’d be able to put together a reasonably solid performance. But when I was out in Majorca my achilles suddenly flared up again, and all of a sudden I was having to work hard to convince myself it would be OK come race day. Thankfully I’d learnt the lesson from Kona and had the confidence to stop running, rather than ploughing on through the pain and making it worse.

So I got to South Africa excited but nervous. Not nervous of where I’d finish in the field, but nervous as to whether I would finish at all. Going into the race wondering if perhaps this was it for me as a pro. And now, one week on, I think I credit my second place to psychological strength as much as physical.

With the help of Simon Morley (and GLL, who kindly give me a lane in the pool once a week for coaching) I’ve worked hard on my swimming over the winter. Somehow, he’s helped me swim faster than I ever hoped to in the pool and I’m pleased that this was reflected to some extent in my swim in the race. The time doesn’t look spectacular but I came out in a small pack with girls who were in the second pack in Kona and who I would never have been able to keep up with last year. Importantly I wasn’t hanging on but cruising. Definite progress and I’m confident I may be able to progress further over the season. I’m not sure I biked quite as well as I wanted to (I felt as though I was biking like a chopper) but it was solid. And the run – well the run was a run of two parts. I ran the first 10 miles or so at what felt like a very easy pace, with a worsening niggle in my Achilles and the demons in my head starting to make a noise. I was running on the grass on the few bits that had grass alongside the road and felt as though I was participating rather than racing at that stage (by the way this is definitely a better way to start an Ironman marathon than the flat out first 5 km approach I used in the same race last year…) But 10 miles in I decided I’d risk it and go out with a bang or not at all. And strangely, as I increased the effort level the discomfort in my Achilles abated and instead I felt the reassuring, normal, aches and pains of an Ironman marathon. I was amazed when on the third lap I realized I was catching 2nd and 3rd. I was running properly and hurting in a good way. I haven’t felt the pain of racing hard in a long time and was embracing it.

To finish second in a championship race, in what was a very deep world class field, is far beyond anything I could have hoped for. And to be joined on the podium by my good friend (and landlord!) Susie made the day even more special. Normally when I finish an Ironman I’m ecstatic. This time I think my overwhelming emotion was relief. I’d conquered my demons, I’d finished running, and I’m back in the game.

When I was talking to my bosses at work about taking a sabbatical at work I told them I’d learn lots from my time as a triathlete that would make me a better doctor in the long run. At the time I wondered if this was just something I was saying to convince myself (and them) that a sabbatical wouldn’t be a waste of time. However, the more I progress as an athlete, the more I realise it’s true.

Failure is only failure if it stops you trying again. When I came last in a cross country race aged 13, I didn’t do anything else competitively until I was 26. This time I didn’t wait quite as long to test myself again. It’s ok to be scared of failing. It’s not ok to be too scared to try. 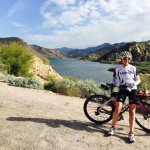 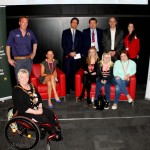 Why do we set ourselves challenges?